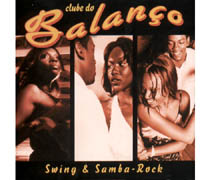 Clube do Balanço, The kings of samba rock.
In the same way that the Rolling Stones payed homage to the masters of the Delta Blues, Brazilian band Clube do Balanço re-ignited the work of the masters of samba-rock — Jorge Ben (up to 77), Luiz Vagner, Bebeto, Roberto Carlos and Erasmo, Branca Di Neve, Marku Ribas, Orlandivo — propping up the ballroom style to the taste this new century’s audiences. With their two albums “Swing & Samba Rock” and “Samba Incrementado” they’ve singlehandedly started a movement that’s been shaking brazilian bootie for the past 6 years. They stylish sets have been acclaimed by a massive audience as they have played thousands of concerts all over Brazil.

“Swing & Samba Rock”, their first album mixes jazz, rock and soul with an irresistible samba beat. It is a development of and almost a tribute to the sound already established by the masters of samba-rock. The album is the product of what has become a cultural vibe that includes dancers, singers, DJs, musicians, producers and club promoters. And that includes a whole roster of new samba-rock bands that ensued following their success. Balanço's “Swing & Samba Rock” CD has a mix of old and new. They play classic tracks like "Coqueiro Verde" (composed by Roberto & Erasmo Carlos), "Palladium" (composed by Ed Lincoln and Orlandivo), "Zamba Bem" (composed by Marku Ribas), "Paz e Arroz" (composed by Jorge Ben), "Segura a Nega" (composed by Bebeto and Luis Vagner) and many other exciting tunes.

As their own incredible saga of love and music progresses (much like the movie: “The Commitments”, without the crash and burn ending) Clube do Balanço awaits its turn to conquer a worldwide audience. Not that they care. In the ballrooms of the poorest neighbourhoods of São Paulo, where the hardcore samba-rock fans have continued do dance since the late 60’s, they are treated as kings. The dancing crowd has led them to the throne.
Password : rocksoul-warriors.blogspot.com
Postado por Warrior

When ever I surf on web I never forget to visit this website[url=http://www.weightrapidloss.com/lose-10-pounds-in-2-weeks-quick-weight-loss-tips].[/url]Lots of good information here rocksoul-warriors.blogspot.com. Let me tell you one thing guys, some time we really forget to pay attention towards our health. Here is a fact for you. Recent Scientific Research shows that about 70% of all USA adults are either chubby or overweight[url=http://www.weightrapidloss.com/lose-10-pounds-in-2-weeks-quick-weight-loss-tips].[/url] Hence if you're one of these people, you're not alone. Infact many among us need to lose 10 to 20 lbs once in a while to get sexy and perfect six pack abs. Now next question is how you can achive quick weight loss? Quick weight loss can be achived with little effort. Some improvement in of daily activity can help us in losing weight quickly.